The objective of the SIDDHARTA (Silicon Drift Detector for Hadronic Atom Research by Timing Application) experiment is to continue, to deepen and enlarge the successful scientific line, initiated by the DEAR (DAFNE Exotic Atoms Research) experiment in performing precision measurements of X-ray transitions in exotic (kaonic) atoms at DAFNE.

A new class of precision measurements of the strong interaction effects in elementary systems like exotic hadronic atoms can be opened by the use of a detection apparatus based on large area Silicon Drift Detectors (SDD) with good energy and time resolution to detect X rays. Understanding low-energy strong interaction dynamics is made possible by the study of elementary exotic systems formed by a hadron negatively charged, like a pion, a kaon, an antiproton or a sigma hyperon, orbiting around a nucleus of hydrogen, deuterium, helium. The measurement at the percent level of strong interaction effects in these exotic atoms allows to explore sectors of non-perturbative QCD missing of experimentally determined quantities. Among these, a crucial role is played by the so called meson-nucleon sigma terms. The cleanest way to determine the antikaon-nucleon isospin dependent scattering lengths, from which the sigma terms can be determined, is the measurement of the x-ray transitions to the ground state in the exotic atoms kaonic hydrogen and kaonic deuterium. In these experiments, the shift of the Ka lines from the purely electromagnetic calculated values, due to the strong interaction, and the broadening of the line, are measured. Then the scattering lengths are determined from these quantities in a direct and precise way, via the Deser–Trueman relations.

The project intends to develop spectroscopic SDDs and enlarge the field of these detectors in triggered applications. The kaon facility of the DAFNE collider in Laboratori Nazionali di Frascati can be substantially improved, percent level measurements in a high background environment becoming possible. Kaons are generated by f(1020)-decay. The high luminosity (1032cm-2s-1), low momentum (127 MeV/c), low momentum spread (0.1%), low pion contamination, makes DAFNE a unique tool for the study of exotic atoms. 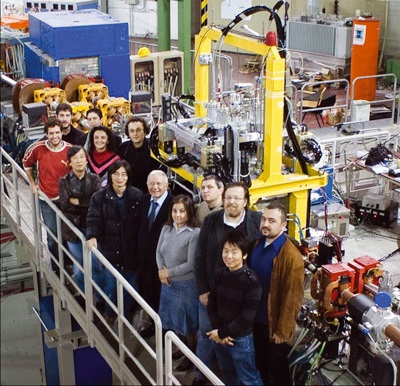