A High Acceptance DiElectron Spectrometer (HADES) is a second generation experiment being under construction at GSI SIS facility in Darmstadt (Germany). Its scientific program includes studies of in-medium properties of hadrons in hadronic matter and electromagnetic structure of hadrons. As a tool for such investigations dilepton spectroscopy after heavy ion and pion induced reactions has been proposed. A major part of HADES physics program is focusing on the exiting suggestion that modifications of the vector meson masses inside nuclear matter could be a signal for QCD chiral symmetry restoration.The chiral symmetry is one of the fundamental symmetries of QCD in the limit of massless quarks. It implies a complete decupling of left- and right-handed particles. In the ground state, this symetry is spontaneously broken which is manifested in the mass spectrum of light mesons. Calculations in the Nambu-Jona-Lasinio (NJL) model predict a partial restoration of chiral symmetry at increased bayron density and tempetature, the restoration will lead to a decrease of the constituent quark masses which might affect the hadron masses when determined in a dense medium. The model calculations predict substantial effects at the large densities(three times the nuclear density) reached in the central reaction zone of heavy-ion collisions at SIS energies. The most suitable probes for possible mass changes are the light vector mesons, in particular the ro and omega mesons, since there exists a decay branch into electron positron pairs which escape from the hadronic matter with negligible final state interaction. The invariant mass spectrum of the pairs represents a direct measurement of the in-medium masses. 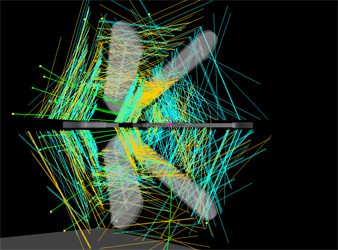